I just had a birthday this week and it was so great! I had a screening appointment for lasik eye surgery and set an appointment in July to have it done! Then, Hubby, Little Miss and I (Teen Miss was in school) went to lunch at IHOP. We went home, Little Miss and I had a nice, long nap, then we all picked up Teen Miss and went shopping to get me a new outfit. Next, we went to a sushi dinner and finlally ice cream at Baskin Robbins. Fabulous day! My Grandmother, my other Grandfather and my parents all gave me money for my birthday. I bought lots of things over the next few days and even took my family out for dinner last night.

Mo has caught a cold. She acts like she feels pretty good, but still has her miserable moments.

Teen Miss is taking me to a movie this weekend as a birthday gift.

I have been cutting up plastic grocery bags to knit a market bag with because I can't find the reusable bag we used to take to the library for the books and movies we check out. I've also been working on the dragons I'm crocheting for Christy.

I'll leave you with a photo of Little Miss trying to use chopsticks at my birthday dinner.

For more of what we're doing, visit my flickr photos! 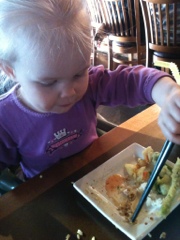 Hoppin' Down The Bunny Trail

My friend, Christy, has asked me to crochet her two baby dragons; one for her daughter and one for her daughters friend. Morgana and I walked to a Smith's Marketplace today to get the yarn for them. I started the first one. The yarn is thinner than I had anticipated. I told Christy and offered to get a different yarn, crochet thread, to be exact. But, she says she's okay with the dragons being smaller than Morgana's.

I've been watching The Dog Whisperer with Cesar Millan on Netflix. That guy is awesome! I've watched episodes here and there since the show started, but it never ceases to amaze me how he helps transform dogs and their owners.

Stu and Kate picked up their new glasses today. They both look great! And hopefully, soon, I won't need glasses or contacts anymore. Stu has surprised me with a screening appointment on Monday for lasik surgery for my birthday!

Yesterday, I finished crocheting this little bunny for a co-worker of Stu.

For more of what we're doing, visit my flickr photos! 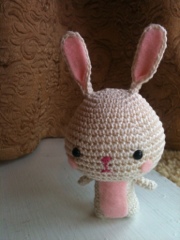 Little Miss is currently addicted to oranges. So, I'm buying and cutting ala-hot of oranges lately. Hey, there could be worse things for your toddler to be addicted to, yeah?

I'm crocheting and amigurumi bunny, similar to Morgana's baby dragon, for a co-worker of Stu's to buy. Today, I put on the face and finished up the head. I'll do the ears next.

Last night, Little Miss enjoyed a desset of the saltine toffee I made. She likes to dip it in milk.

Little Miss has been potty training since January. We only ask if she wants to go and offer for her to sit on the potty. For a while I was only offering at bath/shower time before bed. Last night, I offered at a diaper change and she went. Then again before bed. This morning she went again at diaper change! So, this morning's potty completed a sticker chart and she got a prize! She went a total of 4 times today!

Yes, we checked this book out from the library. It's Morgana's favorite library book this week.

I was going to paint my nails tonight, but it's getting late and I want to knit.

Also, there's some Doritos and cottage cheese that my husband bought me... they're calling my name. Yeah, blew my calorie count today.

How Long Was I Sleeping?

I meant to post last night, but I fell asleep with Morgana when I put her to bed and didn't wake up until almost 3:30 am and went to my bed. Sorry, guys. (And sorry to my husband who I was supposed to watch an episode of Star Trek Enterprise with.)

I can't remember everything that we did yesterday, but here are the pictures I took yesterday and some that were taken in the last week or two.

Navy blue afro or long live the queen? I think I've exposed her to too much RuPaul's Drag Race (which I'm over watching drag queen shows, even if just for a bit).

Morgana got a Doc McStuffins dry erase table with markers from Nana and Papa as a late birthday present. Her face looks so weird. I think this was just before her squinty, big grin "cheese!" face.

I got Twilight Breaking Dawn Part 2!!! Yay!!! I hadn't even seen it in theaters. I watched it with Teen Miss on Monday. It was fun to watch. =)

Morgana had her first dentist appointment yesterday and got a new princess toothbrush! She did great! She was a bit nervous, got startled and little spooked a couple times, kept asking to be done and if she could get down, but she still did really great! I sat right next to her on the chair and touched her the whole time. Just wish the dentist and hygenist weren't such loud talkers. I don't think that fostered a calm and relaxing environment, lol.

I made frozen yogurt bites for Morgana after seeing them on Pinterest.

I made saltine cracker toffee. OMG, you guys! This stuff is superb! I found the recipe at A Southern Grace blog.

I also soaked off my acrylics. I just get so fed up with acrylics when they lift because I don't want to deal with the lifting. It's challenging and I can never get that sliver of an air pocket under the edge filed down before filling them. I hope to fight the urge to put acrylics on again and grow my own nails out again. Being a stay at home mom who cleans house and constantly has her hands in water from all the cleaning, dishes washing/rinsing, hand washing and Little Miss face washing I do all day makes it hard to have a manicure that lasts more than a day and to not break nails constantly. But! I found this video on youtube and hopefully following this will help. I subscribed to her channel. She does awesome nail art AND she crochets!

My weight loss / healthy lifestyle change journey is not going so well. I haven't lost any weight since I've been trying (trying, not doing) to get healthier for several months. I know everything I need to do, I just can't get myself to stick to it. I know I'm getting enough activity, because I'm maintaining my weight, even when I eat like I'm eating for three. I just need to get my food in check. I am really sick of being overweight and that's what drives me when I do well. But, I never make it even 24 hours before doing something unhealthy. Sigh. Guess it's time to pray for the strength and willpower to do it. I should have been praying from the start.

Oh my heavens! I haven't blogged in SO long!

I crocheted these puppies for my 2 nieces and one for Morgana. This was one of all the WIPs that I have a goal to finish before I start any new personal projects. Projects for profit don't count. I have started and finished a couple very small personal projects, but have none in process right now.

Here's the most recent pic of my ruana jacket. I'm waiting to buy more yarn... again.

The SweetLoops doll. She has some hair now.

This granny square throw is another one of my WIPs. It's been hibernating for a long time.

I sewed this mei tai as a gift for my friend, Megan, who is due with her first baby in April.

Little Miss is always so gracious to help me test a new mei tai.

With some of my tax return spending money, I got all the fixins to do sculptured acrylics. I love them! They take a long time. My first set took me two hours. I'll get better and faster with practice.

"Him lookit my butt."

Morgana and I walked to the library today. We haven't done that since late summer, early fall. She had so much fun in all the different play rooms. This one is the glacier room.

Here she is playing in the barn room.

It's so great that the children's section of our city library has places to play for the kids. It's a great alternative to playing outside during the cold and winter.

I got a request today from one of Stu's co-workers for an amigurumi bunny similar to Morgana's dragon. I'm excited to make it!

I've been hooked on RuPaul shows lately; Drag Race and Drag U. Those lady-boys actually inspire me to want to take the effort to make myself more pretty.

To catch up on everything else, visit my flickr photos.